skip to main | skip to sidebar

What is Muscle Repositioning

HISTORY: Muscle Repositioning (MR) is a style of myofascial release that was discovered serendipitously during the author’s Rolfing® practice. This process started during sessions on Rolfers, when they began noticing the maneuvers they were receiving had “something different” from the techniques familiar to them. As these statements occurred more frequently, the author began empirical research . During this process, various particularities of this manual approach led to coining of the term Muscle Repositioning.

PARTICULARITIES: A singular way to twist soft tissue structures (fascia) around harder structures is the starting point to this technique. One result of such a twisting is the unification of body segments into a single block, a phenomenon that is possible to see (cf: videos) and feel through touch when the practitioner produces small shaking movements on the client’s body. Furthermore, such linkage of body parts leads to a unique sense of firmness under the practitioner’s hands.
Once connected to the sensation of firmness, the maneuvers then proceed, up to a point in which a release naturally takes place. Until recently, we interpreted this phenomenon merely mechanically, i.e.: the twisting of fascias would produce its tensioning, which, by its turn, would compress the joints and unite the segments that lie between them. Such interpretation may be accurate, but more than pure mechanics seems to be taking place.
If the contact with the sense of firmness is accurate and long enough, another class of phenomena follows: the client often begins to show involuntary motor reactions . The most outstanding of such reactions was first noticed during a maneuver performed in the occiput area: the occurrence of a progressive isometric activity of the cervical erectors, felt by the practitioner as an involuntary pushing of the client’s head cephalad and backwards. Sometimes this reaction is strong enough that one can see and palpate the muscular activity. Apart from such activity, other involuntary concurrences have also been observed, such as horizontal eyes movements, clonic and tonic appendicular movements and tremors.

HYPOTHESIS: The observations just described led to the hypothesis that this form of touch may stimulate neurological reactions. EMG measurements were them performed in order to check such hypothesis (published article). Having detected tonic reactions in the neck in all subjects tested, we proceeded searching for muscular activity in other localizations and maneuvers. So far we have detected cervical erector as well as abdominal activity during a maneuver in the thoracic area (cf: video links), suggesting that the attribute of evoking reflexes may be a blueprint of Muscle Repositioning maneuvers altogether.

CLINICAL EFFICACY AND REFLEX REACTIONS: During the EMG measurement performed so far, it seems that the firmer the feel, the higher EMG signal, i.e.: the degree of firmness is possibly related to the intensity of the tonic reaction, as reflected by the EMG signal. Moreover, clinical experience showed that the firmer the feeling to the touch, the more effective a maneuver. It follows that, if the clinical efficacy of the maneuvers is really related to the tonic reactions, the eliciting of this sort of neural reflexes during the clinical practice would be a desired effect.

MUSCLE REPOSITIONING AND MARTIAL ARTS: Interestingly, these tonic reactions closely resemble those encouraged in certain Chinese martial arts, like Tai-Chi-Chuan and I Chuan. In light of this observation, one can speculate that Muscle Repositioning stimulates physiological self-regulatory motor and postural mechanisms, like martial arts are believed to do. In this sense, this technique may be considered an approach that releases myofascial structures and acts as an integrative stimulus simultaneously.


FROM SUBJECTIVITY TO OBJECTIVITY: From the beginning, the description of Muscle Repositioning has been based mainly in subjective variables, such as the sense of firmness felt by the practitioner. In the search for greater objectivity, one aspect that has claimed our attention is the matching of sensations experienced in both client and practitioner: i.e., once the sense of firmness has been achieved, a whole class of sensations simultaneously emerges in the clients, such as a sense of connectedness among structural segments and a sense of bipolar expansion in the body’s longitudinal axis, among other sensations. Lately, we have been considering if such categories of sensations might be adequate objects of study in qualitative research protocols in order to bring a greater degree of objectivity to this manual method. But now, in light of the possibility of detecting EMG activity during the maneuvers, a high degree of objectivity may be achieved. If this possibility proves to be reliable, one can foresee that EMG recordings could be used to guide and monitor the appropriateness of the manual touch (e.g.: in the teaching and research settings). This could also give rise to a more precise and reproducible technique.

SURGICAL TOUCH AND MYOFASCIAL FORCE TRANSMISSION: In order to achieve the appropriate sensation of firmness, the touch should approach the soft tissues in an oblique angle. Such obliquity, when coupled with the counter-pressure given by the inertia of the united bodily segments, apparently steers the resultant vectors so as to produce internal shear forces among musculoskeletal structures in very precise directions. The result of such combination of forces is a clear sensation of relative movements among myofascial compartments. The feeling resembles the surgical maneuver named blunt dissection. Sometimes it is even possible to pinpoint the cleavage lines between fascial planes engaged in a certain maneuver. This approach may possibly change the relative muscle positions, directly affecting the myofascial force transmission as described by Huijing and colleagues.

TEACHING: We have been teaching Muscle Repositioning for the last four years and the feedback we are gathering is very encouraging. Although it often takes a good amount of training to get the right sensations, the results seem to be worthwhile.

POSTER:
This is the poster we presented in the First International Fascia Congress, held in The Conference Center at Havard Medical School, Boston, MA, in october 4-5/2007 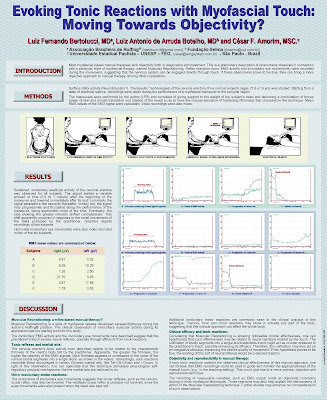 Posted by Muscle Repositioning at 8:28 PM

Muscle Repositioning
As a physiatrist, I've been using Rolfing® for the treatment of musculoskeletal disorders for the last 19 years. During such experience, I developed a new style of myofascial release, named Muscle Repositioning-MR. Particularly economic and effective, MR is characterized by integrating body segments during touch, condition associated with the occurence of various sorts of motor reflexes. Among them, tonic reflexes stand out as a possible mechanism underlying MR's efficacy; moreover, monitoring such reflex activity can potentially bring objectivity to this style of fascial manipulation.